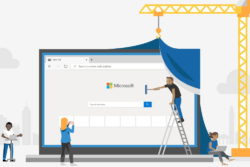 Via The Verge - af Andreas Ellemann

https://en.wikipedia.org/wiki/Chromium_(web_browser) skrev:
Browsers based on Chromium

Blisk is a browser available for Windows 7 and later, OS X 10.9 and later that aims to provide an array of useful tools for Web development.

CodeWeavers CrossOver Chromium is an unofficial bundle of a Wine derivative and Chromium Developer Build 21 for Linux and macOS, first released on 15 September 2008 by CodeWeavers as part of their CrossOver project.[139][140]

Comodo Dragon is a rebranded version of Chromium for 32-bit Windows 8.1, 8, Windows 7 and Vista[141] produced by the Comodo Group. According to the developer, it provides improved security and privacy features.[142]

Cốc Cốc is a freeware web browser focused on the Vietnamese market, developed by Vietnamese company Cốc Cốc, based on Chromium open-source code for Windows.[143] According to data published by StatCounter in July 2013, Cốc Cốc has passed Opera to become one of the top 5 most popular browsers in Vietnam[144] within 2 months after official release.[145]

Epic Browser is a privacy-centric web browser developed by Hidden Reflex of India and based on Chromium source code.[146]

Falkon a QT-based GUI, based on the Chromium core.[147]

Opera began to base its web browser on Chromium with version 15.[150]

Qihoo 360 Secure Browser is a popular web browser in China.[151]

SalamWeb is a Web Browser based on Chromium for Muslims allowing to view positive websites/information only (called Halal).

Sleipnir is a Chromium derivative browser for Windows and macOS. One of its main features is linking to Web apps (Facebook, Twitter, Dropbox, etc.) and smartphone apps (Google Map, etc.). It also boasts what it calls "beautiful text," and has unique graphical tabs, among other features.[153]

SRWare Iron is a freeware release of Chromium for Windows, macOS and Linux, offering both installable and portable versions. Iron disables certain configurable Chromium features that could share information with third parties and additional tracking features that Google adds to its Chrome browser.[154]

Torch is a browser based on Chromium for Windows. It specializes in media downloading and has built-in media features, including a torrent engine, video grabber and sharing button.[155]

Vivaldi is a browser for Windows, macOS and Linux developed by Vivaldi Technologies.[156][157] The browser is aimed at staunch technologists, heavy Internet users and previous Opera web browser users. Vivaldi aims to revive the old, popular features of Opera 12 and introduce new, more innovative ones.

Yandex browser is a browser created by the Russian software company Yandex for macOS, Windows and Linux.[158] The browser integrates Yandex services, which include a search engine, a machine translation service and cloud storage.

Flock – a browser that specialized in providing social networking and had Web 2.0 facilities built into its user interface. It was based on Chromium starting with version 3.0. Flock was discontinued in April 2011.[159][160]

Maelstrom by San Francisco-based BitTorrent Inc. which took the Chromium framework and integrated a BitTorrent engine under the hood, so that torrent files could be played directly from the browser and torrent-powered websites no longer had to rely on central servers.[161][162][163][164] Although no official discontinue notice has been announced as of February 2017, the BitTorrent Inc. website no longer provides the browser for download, the last build has not been updated past Chromium version 44 and the last post by the project lead staff was on 14 September 2015.[165]

Redcore – a browser developed by Chinese company Redcore Times (Beijing) Technology Ltd.. and marketed as a domestic product that was developed in-house, but was revealed to be based on Chromium[166]

Rockmelt – a release of Chromium for Windows Mobile and iOS under a commercial proprietary licence. It integrated features from Facebook and Twitter, but was discontinued in April 2013 and fully retired at 10am PT on July 31, 2013.[167][168] On August 2, 2013, Rockmelt was acquired by Yahoo! Rockmelt's extensions and website were shut down after August 31, 2013. Yahoo! plans to integrate Rockmelt's technology into other products.[169]

RIP internet as we know it...
"Compare yourself to who you were yesterday, not to who someone else is today" - Jordan Peterson
Gå til top
1